It had been a while since I had attended a conference or other activities centered around health advocacy. This was partly due to a choice that I had made to focus more on myself as well as simply focusing on my career and recent return to the classroom to work on my Master of Social Work at Saint Louis University's School of Social Work. All in all, life had been going well. There is was this strange duality that I had felt, we fight to be healthier so we can have "normal" lives yet sometimes we don't live healthy lives... I have found that as of late I have not made as many videos as when I first started making them. When I was first diagnosed with HIV on June 6, 2011 making videos was therapeutic for me. It was my way of handling my diagnosis.

I found my voice and through it all I shared my life with viewers from around the globe. Many who would tune to YouTube in their hour of despair to find that there was someone else like them. There was someone living with HIV and that made them feel better. This was even something that I had done when I was first diagnosed. There is this natural desire to reach out and to feel that we are not alone in a world that is changing directly under our feet. A world with which we are not familiar and we do not yet know all of the rules or implications.

After a period of time things "normalize" and we settle into our new health routines. We adjust to the limitations or changes which occur. What was once unfamiliar and scary now is simply part of our DNA. So it goes for my work on youtube and other health advocacy. When I saw a friend post about the Healthevoices16 gathering in Chicago, I instantly knew that I wanted to attend. Thanks to Janssen my travel and hotel arrangements were covered so that was one less thing that I had to be concerned with. My sole purpose was to meet with other health advocates and to learn how to better care for myself and also how to improve my health advocacy. Below are a few of the things that I walked away with after a truly amazing weekend!

1. The team at Tonic Life Communications was simply amazing!

I have never met so many amazing people who were genuinely concerned with our well-being and how we were feeling. This wasn't simply an act or just a job to them. The entire team clearly loves their job and it showed! Personally, I am biased towards Rachel Yurchak. She is amazing!!! I had the amazing opportunity to have her in my small group dinner on Saturday night. Rachel is a beautiful person who is making the world a better place. 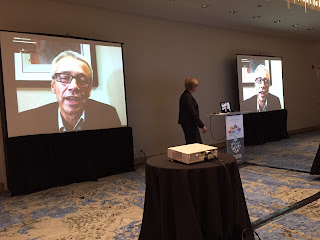 2. Janssen is genuinely concerned with patients!

This was nevermore apparent than during the opening remarks when leadership from Janssen welcomed us. As we went into the evening we were all amazed as we were greeted by the Executive Vice President of Pharmaceuticals, Joaquin Duato via Skype! His passion towards clients was clear and his energy came through the screen as the room interacted with him. He even shared a touching story about his grand-mother and her health journey.

3. I met so many amazing health advocates from across all health conditions.

Sometimes it is easy for us to think that we are alone in this fight against whatever health condition we are dealing with. For the first time ever, I was in a room with more than 90 other health advocates who are just like me. No, not all of them were living with HIV but they all know what it is like to get a diagnosis that will forever change their lives. I also had a moment of clarity when I realized that as a person living with HIV, it impacts my life and health in such a small way. As I listened to others share about their health journeys, it made me realize that it doesn't matter what the diagnosis is; we are all on the journey together. That was one of the things that we all had in common. We had started as health advocates because we wanted to have control over our lives and our health. 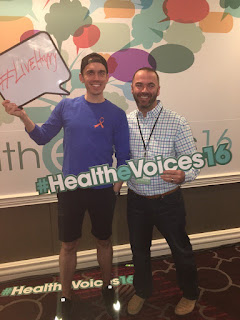 This was the first time that I had the honor of meeting Josh. I felt like I had come to know him through his videos but let me tell you... I cannot say enough good things about him. Besides being a social butterfly, he is an overall great person.

I am so glad that I sat in on his session on how to improve the use of video in our health advocacy. Did I mention the fact that Josh is a genius!!! If you ever get a chance to attend one of his sessions, do it! You will not be sorry.

His personality had us all in stitches and his positive attitude is truly contagious. Not to mention that his momma is just as amazing! It isn't hard to see that the apple doesn't fall far from the tree.

There were so many great sessions to sit in on however one of the sessions which stood out was about self-care. As I sat in on the session I heard others share feelings that I thought I was the only one who felt that way. When I first started blogging I loved to do it. Over time that joy began to fade and it began to be more of an obligation. What the session taught me is that in order for me to be able to help others, I have to take care of myself first and foremost.

6. There are so many great HIV advocates and I got to spend an entire weekend with them! 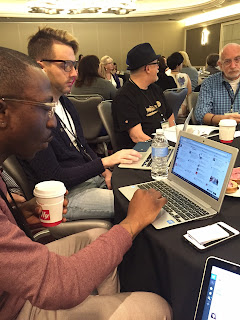 Benjamin Di'Costa, Bob Leahy, Brian Ledford, Guy Anthony, Josh Robbins, Joshua Middleton, Kevin Maloney, Wayne Bristol and Kamaria Laffrey. I was so amazed by each and every one of them. Each of these advocates are doing their own thing in order to help others. Kevin and I go way back to 2012 when we were at the International AIDS Conference which was hosted in DC. That even forever changed who I was and would become and I was glad that I got to share it with my friend!

I had been around Benjamin before while attending AIDS Watch however I had not taken the time to really get to known him. He is such an amazing guy who is really passionate about the work that he is doing. I also learned that his meme game is on point when it comes to twitter!

I especially loved meeting Bob Leahy for the first time. Bob actually gave me my very first interview when I started as an HIV activist.

There is nothing that reenergizes me than being around other advocates who are simply working to make the world better. We do what we can with what we have. 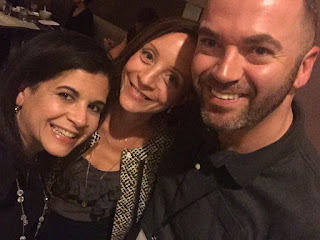 7. My work will never be done until we all have better health!

Have you ever met amazing people and you know that they have been placed in your path for a reason? There has never been a statement that is more true with two amazing women pictured to the left!

In full disclosure, I was considering not attending the small group dinners on Saturday since I was getting tired. I did and I am so thankful that I did. Jen Campisano and Ann Marie Otis were part of the group that I was assigned to that night. As we began to talk we shared our various health journeys.

We laughed, we cried and by the end of the evening they said that felt empowered by me but I have to tell you that I was empowered by the both of them! It was by this point that I truly began to understand the theme of the weekend "deeply rooted connections". As we parted the weekend to head back to our homes, there was no doubt that the friendships and relationships which I had formed at Healthevoices 16 would be long-lasting.

Britt Johnson, also known as the hurtblogger is amazing. She is not afraid to stand up and challenge the status quo in order for patients to be heard. Let me just say that I want Britt on my side any day of the week!

So what did I take away from HealtheVoices16? I walked away knowing that I am not alone. There are others who are just like me in the world. There are people who are living with health conditions and they are simply doing their part to empower other patients to live the best possible lives that they can live. For me, healthevoices16 reminded me that I need to build time into my hectic life in order to care for myself and to love myself.

Janssen thank you so much for an amazing weekend. I will definitely be at #Healthevoices17!!!
Posted by Unknown at 9:15 PM

I'm here again to appreciate. DR WILLIAMS God will always continue to bless you more abundantly, for the good works you did in my life, I will always keep on writing good and posting my testimonies about you on the Internet, I’m KATE from San Juan, Puerto Rico. I was tested HIV positive, I saw a blog on how DR WILLIAMS cured people with his herbal portion, i did not believe but i just decided to give him a try, I contacted him and also got my healing, i am so happy. If you have any problem or you are also infected with any disease, contact him Drwilliams098765@gmail.com for advice and for his product,i hope this testimony also help some one out there.