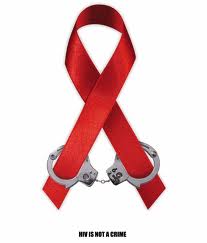 Today while on Facebook, a message popped up regarding a proposal that was being made in Topeka, Kansas that sought to quarantine those infected with HIV/AIDS. While this is completely absurd, we currently have criminal statutes in 34 states that are dong this very thing.

Patients who are living with HIV are treated as second-rate citizens who seemingly have no protectin under the law. That is a fact! While everyone can see the injustice of a message calling for quarantine, there seems to be little or no outrage over current criminal statutes which are putting patients in prison. Additionally a person that is prosecuted and sentenced in one state may get a life-sentence while in another state it substantially different.

Kansas Seeks to quarantine those infect with HIV.

There is no data to support that criminalization helps to reduce rates of infection. In fact these criminalization statutes only serve to further stigmatize those who are living with HIV/AIDS and to stop people from getting tested and starting treatment. Below are comments highlighted by Sean Strub who heads up the cause of modernizing HIV criminal statues with The SeroProject.

HIV Criminalization is Bad Public Health Policy
HIV criminalization statutes are terrible public health policy because they discourage persons at risk from getting tested. Those with HIV who are aware of their HIV positive status are more responsible in their sexual behaviors than those who are unaware they have HIV ; testing is a basic tool of HIV prevention as well as an essential gateway to care.

Criminalization statutes also make it more difficult for persons with HIV to disclose their HIV status. Those who know they have HIV already suffer significant discrimination and stigma. Disclosing one's HIV status can be emotionally difficult, risking rejection from family and friends, sometimes with great insult or abuse, and often jeopardizes one's employment, housing, relationships or personal safety. Criminalization of HIV legitimizes the ignorance, homophobia, racism and sexophobia that fuels inflated fears of HIV and those who have HIV.

Criminalization undermines efforts to prevent new HIV infections and provide access to care in multiple ways: Ignorance of one's HIV status is the best defense against a "failure to disclose" prosecution, which creates a powerful disincentive to getting tested and learning one's HIV status.

Young African American men who have sex with men are among those at highest risk of acquiring HIV, yet also among the most difficult to get tested. The prospect of prosecution for failing to disclose--especially since these prosecutions often boil down to a "he said, he said" or "he said, she said" situation--is a powerful and likely growing disincentive to taking an HIV test.

Most new infections are caused by sexual contact with persons who have not been tested and are unaware that they have HIV, yet only those who have taken responsibility and gotten tested are subject to prosecution.

Prosecuting the failure to disclose one's HIV status undercuts the most basic HIV and STD prevention message: that every person must take responsibility for his or her own sexual health.

Prosecuting the failure to disclose values the "right" to an illusion of safety, for those who are HIV negative or who do not know their HIV status, over the privacy rights of those who have HIV.


Examples of Prosecutions
The most publicized HIV criminalization cases are often driven by politically ambitious prosecutors and inflammatory or hysterical media coverage. These prosecutions feed into the public's ignorance and anxiety about HIV, reinforce negative stereotypes about people with HIV, and send conflicting messages about the real risks of HIV transmission in a given circumstance.

They depict people with HIV as dangerous potential infectors who must be controlled and regulated, making it more difficult to create a safe environment for people at risk to get tested and people with HIV to disclose their status.

The Iowa case provides a sobering illustration of the problem. The person with HIV who was charged with failing to disclose his status to a sexual partner was a 34-year old gay man who had been a volunteer with a local AIDS organization. He met a male partner online and went to his house. The person with HIV was on anti-retroviral therapy, had an undetectable viral load and used a condom when anally penetrating his partner. He posed little or no risk of transmitting the virus to his partner.

When the partner later heard that the man he had been intimate with had HIV, he went to the county prosecutor and pressed charges. The person with HIV was convicted under Iowa's extreme statute and sentenced to 25 years in prison. Fortunately, advocates were successful in getting the sentencing reviewed and after serving eleven months, he was released on five years' probation.

However, he still must register as a sex offender for the rest of his life, is subject to wearing an ankle monitoring bracelet and cannot leave his home county without permission from the court. He may not be around children (including his nieces and nephews) without adult supervision. He must, for the rest of his life, take lie detector tests every six months that ask intimate questions, including whether he wears women's clothing and if he is attracted to children or animals. He is prohibited from viewing any kind of pornography or even visiting social networking sites, like Facebook.

Iowa's statute is particularly broad--in theory, it could cause a person with HIV who kissed another person without disclosing their HIV positive status to be sentenced to as much as 25 years in prison--but other state's statutes and sentencing are equally as absurd.

Texas convicted Willie Campbell, an HIV positive man, for "assault with a deadly weapon" and sentenced him to 35 years in prison after he spat on a police officer who was arresting him for public intoxication.

Gregory Smith was within a year of his release from a New Jersey prison (after serving time for burglary) when he was charged with attempted murder, assault and terroristic threats following an incident in which he allegedly bit and spat on a guard at the county jail where he was held (Smith denied the charges). An additional 25 years was added to his sentence; he subsequently died of AIDS while incarcerated.

In late 2009, Michigan charged Daniel Allen, who has HIV and was involved in an altercation with a neighbor, under laws designed to combat terrorism, including "possession of a harmful biological agent". Prosecutors equated his HIV infection with "possession or use of a harmful device."

A man in Ohio is serving 40 years for failing to disclose to a girlfriend that he was HIV positive. He claims she knew he was positive and only went to a prosecutor after he stopped dating her and moved in with another woman.

An interesting note about the cases described above: none of them resulted in anyone actually acquiring HIV.
Posted by Unknown at 9:10 AM

Labels: Aaron Laxton, ACT UP, criminalization, HIV/AIDS, How to survive a plague, Kansas, My HIV Journey, Positive, The Sero Project