When your dick develops a habit… 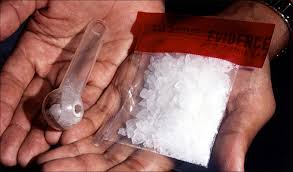 My name is Aaron and I am an addict. I will be the first to admit that I love crystal, “tina”, Adderall… I have been clean for 459 days and counting but I will be an addict for life. Crystal use in the LGBT community and specifically in the kink community is alive and well! Recently I was alarmed while in Atlanta when I logged onto Grindr to pass time; the amount of guys looking to “Party” or “PnP” was staggering.  As a community we have to be honest that when it comes to drugs and alcohol, if it was not fun initially we would never have done it. There comes a point however when the novelty wears off and we are left with a habit, a habit that our dick had helped us develop.

No one wakes up one day and decides that they are going to become addicted to drugs; we need to be very clear about that. A habit develops over time and before a person realizes it, they have reached rock-bottom. For some people that rock-bottom is worse than others. Whether it is slamming “tina” at the bathhouse and getting slammed or simply popping a few “addys” for a night on the town, we did it because it was fun. There was a certain amount of pleasure that came from that high. No one ever tells you though that you will always be chasing that first high, which is why an addict requires higher amounts of the drugs. Anyone who tells you that drugs were not fun in the beginning is either full of shit or they do not know what they are talking about.
Amphetamines cause a hyper-sense of sexuality that initially is alluring until most people figure out that they are up all night with a limp-dick. There is nothing worse than being awake in the wee-hours of the morning, endlessly searching “fuck-sites” such as craigslist, Recon, Scruff, Grindr and so forth… There is nothing worse than the emotion wreckage that a person is left to deal with as the drugs begin to leave their body and they start to withdrawal.

A habit develops over time, slowly what began as something that was done socially becomes something that you do alone. You isolate yourself from everyone around you. Your work performance begins to slip. You begin to lie to cover up your usage. Through it all however you say to yourself... “It is recreational, I only do it every now and then… I have it under control.” Those are the famous last words of every addict; you are no more in control than other addicts. All addicts like to think that they are somehow different. At the end of the day however, your dick has helped you develop an addiction.

If there are things that you can only do when you are high on meth… should you be doing them?  Additionally how many of us have placed ourselves in extreme risk of HIV exposure or become infected while high on crystal meth, tina, Adderall or whatever you choose to call it. I can say that I did! Regardless of what your definition of kink is, there is only one definition of addiction. To all of my brothers out there that are currently dealing with an addiction that their dick helped them develop, I would say that there is help available. Nothing in your life is beyond repair and at least worth the effort to attempt to fix.

To others that are in our community that are turning a blind-eye to those that are actively using meth… wake the fuck up. You have an obligation to call people out! Do not simply look down at people or turn your back on them. That is how we are going to overcome the war that is raging with crystal meth.
Posted by Unknown at 10:53 AM